Hearty Vegetable Soup
Soups & Stews / December 16, 2013 / 0 COMMENTS
Nothing is better than coming inside from a cold winter day and warming up with a hearty bowl of soup. Making soup from scratch is by far better than the canned stuff. Canned soups are packed with a ton of sodium. The recommended intake of sodium is < 2,400 mg per day. In some soups thats 75% of your sodium intake right there!
Making homemade soup is simple. Plus, if you make a big batch you can freeze half and bring it back out later in the winter season. Stick to the broth based soups with tons of vegetables for fewer calories and for a nutrient dense meal. 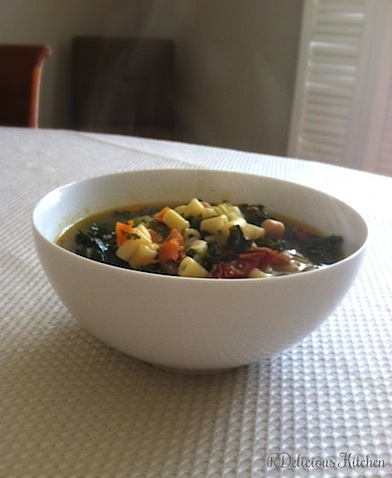 1. In a large stock pot over add the bacon and cook until crispy. Add the carrots, celery, garlic, and onions to the pot, season with salt and pepper, and cook until the veggies are tender, 7-8 minutes more.

2. Add the mushrooms, sundried tomatoes, and cook for another 2 minutes.

3. Add the stock and water to the pot, and bring up to a boil.

4. Add the kale, pasta, and chickpeas to the soup pot, and cook until the pasta is al dente. Season the soup with salt and pepper to taste.

5. Ladle the soup into shallow bowls. 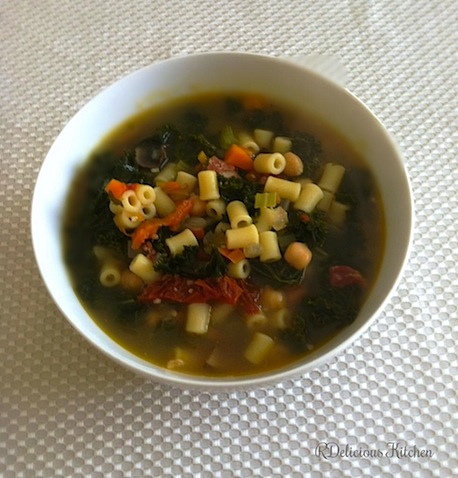 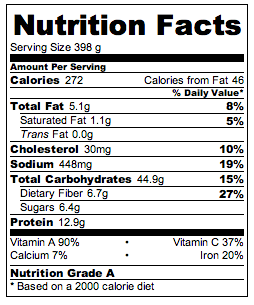 (nutrition facts based on calorie count)